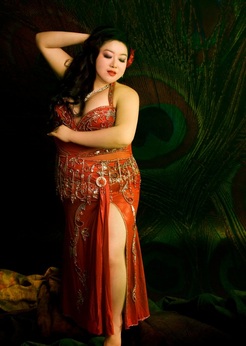 Dubbed “Indonesia’s bellydance icon”, Christine Yaven fell in love with bellydance over a decade ago while pursuing an advanced degree in Australia. Since opening Indonesia’s premiere Middle-Eastern dance Centre, Bellydance Jakarta, she has earned a reputation as one of South East Asia’s trailblazers, known as a leading authority and instructor.

Although she is an Ivy League graduate (Wharton School of Business, University of Pennsylvania), she ultimately decided to pursue her passion for bellydance. She is Indonesia’s only certified instructor, having undertaken intensive training courses held by world famous, acclaimed masters of Middle-Eastern dance, namely Hadia (Canada); Raqia Hassan (Egypt);Tamalyn Dallal (Bellydance Superstars, USA) as well as studying extensively through workshops and intensive courses throughout the globe with other respected Middle-Eastern dance artists to constantly deepen her knowledge of this dance form.

Christine’s teaching not only spans precise technique, she also teaches the soul, values and heritage of this beautiful dance, ensuring that her ever growing student body also approach this ancient art-form with the respect it deserves.

Her performances are mesmerizing, a perfect fusion of liquid motions, subtle sensuality and exquisite musicality. Her talent is rivaled only by her teaching abilities, making her one of the region’s most in demand Middle-Eastern artistes. Besides frequent requests to impart her expertise around the country, Christine is the first Indonesian instructor to have the honor of being invited to teach and perform overseas at international festivals in Hong Kong, Malaysia, Italy and more.

Since opening her doors in 2006, Christine has directed and staged several large bellydance productions at Gedung Kesenian Jakarta (Jakarta Performance Arts Theater) as part of the Jakarta Anniversary Festival, drawing crowds of up to 350 people. She has also captured the interest of local and international press, featured in dozens of articles and segments in newspapers such as the Jakarta Globe and The Malaysian Star.

In 2012, she co-founded Raks by the SEA, South East Asia's first bellydance festival which was held in Bali, Indonesia this year and drew more than 70 participants from around the world.